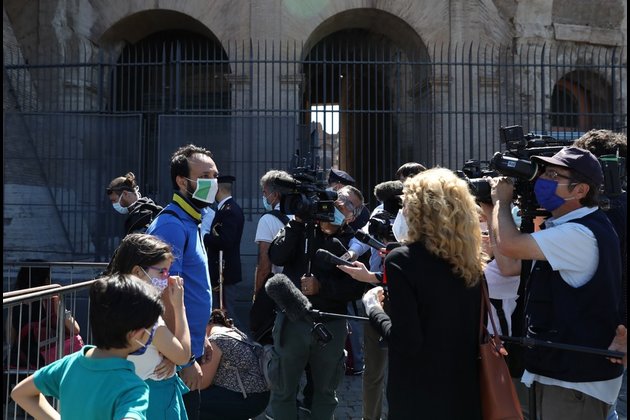 A visitor is interviewed by media at the reopened Colosseum in Rome, Italy, June 1, 2020. (Xinhua/Cheng Tingting)

"The lockdown is over but the crisis continues," commented Confturismo-Confcommercio President Luca Patane, who called on the government to do more for the hard-hit tourism sector.

ROME, July 11 (Xinhua) -- A summer season without foreign tourists will cost Italy 12 billion euros (13.6 billion U.S. dollars) in lost revenue for hotels, restaurants, transportation firms and retailers, according to a new report from the National Confederation of Farmers (Coldiretti) on Saturday.

Last year, over 16 million foreigners spent their holidays in Italy during July, August and September. However, Italy is currently off limits to many key markets due to ongoing travel restrictions linked to the COVID-19 pandemic, said the report.

June 2020 saw domestic and foreign arrivals drop by 10 million and this had a "drastic impact on the economy and on jobs in the Made-in-Italy holiday sector, which is made up of 612,000 businesses employing 2.7 million workers," Coldiretti noted in a recent report on July 9.

People wait in line to have their body temperature checked before entering the reopened Colosseum in Rome, Italy, June 1, 2020.(Xinhua/Cheng Tingting)

However, 39 percent of the respondents said they are not sure when they will depart, and another 19 percent remain undecided as to whether or not to take a trip because they aren't sure they can afford a vacation after the lockdown.

"This is a scenario of great uncertainty, which is confirmed by the fact that just 36 percent of respondents who intend to take a holiday say they have already booked their trip," Confturismo-Confcommercio said in a statement. "This is an incredibly low percentage for this time of year."

A girl swings by Lake Bracciano in Anguillara Sabazia near Rome, Italy, on June 16, 2020. (Xinhua/Cheng Tingting)

"The lockdown is over but the crisis continues," commented Confturismo-Confcommercio President Luca Patane, who called on the government to do more for the hard-hit tourism sector.