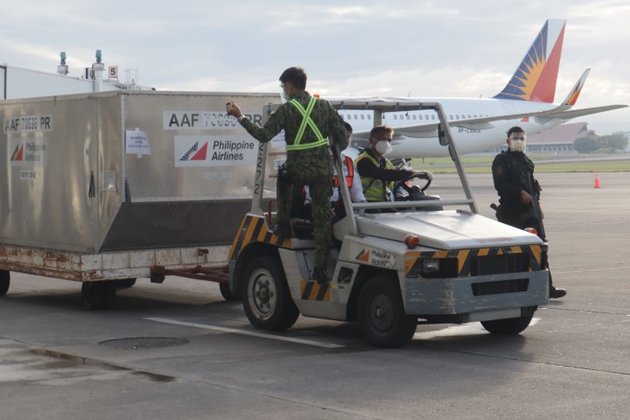 At around 6:40 a.m. March 2, a Philippine Airlines aircraft touched down at the Davao International Airport laden with a cargo containing 12,000 vials of CoronaVac vaccines.

Under heavy police security, the precious cargo was immediately whisked off to the Department of Health-XI office for storage. The vaccine roll-out in Davao City will begin on March 5, Friday at the Southern Philippine Medical Center (SPMC).

Dr. Ricardo Audan, OIC Medical Center Chief of the SPMC said they will be conducting their last simulation exercise this Wednesday (March 3) with the hospital consultants before the actual vaccination.

Dr. Audan said he will be the first person to be vaccinated on Friday.

"Nag-volunteer ko because I have to be a role model. I have to show to the people sa SPMC na safe, any vaccine intended for COVID is safe," Dr. Audan said during the reception of the vaccine at the airport.

Officials and personnel of the Department of Health-XI, Food and Drugs Authority (FDA), Civil Aviation Authority of the Philippines (CAAP), City Health Office of the Davao City Local Government Unit alongside security elements of the Philippine National Police and members of the media welcomed the historic first batch of COVID-19 vaccines in this part of the country.

The 12,000 vials were part of the 600,000 CoronoVac vials which arrived in the country on Feb. 28 and which were donated by the Chinese government.

The CoronaVac vaccine manufactured by Sinovac Biotech Limited is an inactivated vaccine, this type of vaccine contains viruses whose genetic material has been destroyed to prevent replication, but these inactivated vaccines can still elicit an immune response. This is similar to familiar traditional vaccines like those used to prevent polio and rabies.

The March 5 vaccine rollout at the SPMC will target to inoculate 150 frontliners. The vaccination will be done for two weeks to cover the 5,900 employees of the SPMC.

Meanwhile Department of Health-XI Regional Director Annabelle Yumang said they have requested to the national office for another 4,000 vials of CoronaVac. (PIA/RG Alama)