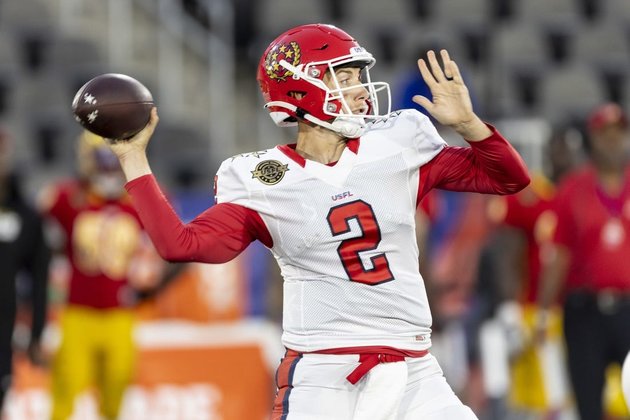 Backup Luis Perez scored a 1-yard touchdown on a quarterback sneak with two seconds left to deliver the New Jersey Generals a 26-25 victory over the Houston Gamblers on Sunday in Birmingham, Ala.

During a back-and-forth fourth quarter, the Gamblers went ahead 25-20 when defensive tackle Tomasi Laulile recovered Perez's fumble and took it 59 yards for a score. But Houston's two-point conversion attempt fell incomplete.

Perez finished with 159 yards passing and a touchdown on 18-of-24 attempts for the Generals (5-1) after he relieved injured starter De'Andre Johnson. KaVontae Turpin had 10 receptions for 106 yards and two touchdowns, one from Perez and one from Johnson.

Clayton Thorson went 15-for-19 for 171 passing yards and tossed three touchdowns and one interception for the Gamblers (1-5).

Anthony Jones racked up 102 rushing yards and a touchdown on 22 carries to power New Orleans past Pittsburgh.

Jordan Ellis added 47 rushing yards and a touchdown, and cornerback Ike Brown returned an interception 97 yards for a touchdown for the Breakers (4-2).

Pittsburgh trailed 23-3 after the pick-six but forged a comeback effort with two touchdowns in the fourth quarter. Quarterback Vad Lee, who finished the day with 198 yards on 17-of-34 passing, threw his lone passing touchdown to Bailey Gaither and later ran in a 4-yard score for the Maulers (1-5).

But the Breakers kept them at bay, and Taylor Bertolet kicked his second field goal of the game in the final minute to put it out of reach.

SAN FRANCISCO, California: In response to a string of shootings that have broken out at U.S. properties it lists, rental ...

BEIJING, China: Chinese airlines announced last week that they would purchase some 300 Airbus jets. This is the largest order ...

CAIRO, Egypt: Egyptian authorities have prohibited swimming in a stretch of the Red Sea after an Australian woman was killed ...

SOFIA, Bulgaria: Russian diplomats and their families departed Bulgaria over the weekend, amidst heightened tensions between the two eastern European ...

No end in sight as South Africa suffers thru power cuts

JOHANNESBURG, South Africa: More frequent power cuts in South Africa have affected households and businesses across the country, with state-owned ...

HONG KONG: An engineering vessel with 30 people on board went missing 200 miles off Hong Kong after it snapped ...

BRUSSELS, Belgium: Negotiations on a free trade agreement between the European Union and New Zealand ended successfully this week, paving ...

Birds of Prey (and the Fantabulous Emancipation of One Harley Quinn